This Cameron update (Camdate? no thats something else. Something sexier.) is sponsored by coffee and well a general feeling that I've been neglecting my extended monkey-sphere recently.

Work has been intensive, as the current project has three separate SKUs that all are supposed to be submitted in relatively short succession that all aren't really done yet. What this means is: I have a metric fuckton of overtime. Which also means my life outside of work/home has once once again been backed over by a truck. But at least its a truck full of money. (I honestly didn't think I'd be able to save that metaphor. I'm like some crazy ER surgeon of metaphors-but obviously I can't do shit with similes.)

Otherwise has been very good aside from that. I've managed a stable relationship with a young woman named Genny for the last couple of months and I feel pretty damn good about that. Like there's really nothing wrong, nothing that makes this complicated, no drama. It's downright shocking. I'm planning a separate geekier post, so those dorks who like to demand my presence at dorky gatherings do not fret, your worries will be assuaged shorty.

I love how I start these, save a draft, then completely forget until weeks down the line when tell the computron that yes, I do in fact wish to restore from a saved draft, I am confronted with a single word:

In this particular case I ended up winning the expletive jackpot. I might possibly have those dreaded pig flus that are starting to drift out from the Labor Day crater that was PAX. I have felt achy and tired, and have a miserable dry cough all day. I am also pretty sure I am running a fever this very second. My brain is cooking up odd shapes as I speak, so at least I'm enjoying it. I feel odd thinking that this has a very high chance of being a specific pandemic-y-type-flu thing but all I'm going to bother doing is sit around a drink some tea.

I've said it a few times on the internet now, so apologies for any overlap, but still.
These pig flu's don't got nuthin' on me. I eat swine for breakfast.

I just "restored from a saved draft" and all that appeared on this blank sheet was the word "After".

I wish I new what it was waiting for.

Hey its been way too long. But never fear, I'm pretty sure I'm here. Maybe.

Life kinda feels like I'm in a holding pattern, just circling the same couple of points over and over. Wake, work, eat, sleep, repeat. I've been trying really hard to get out and have some fun on the periphery but so far that hasn't really been often enough to feel like I've broken this spell.

Yeah I'm totally allowed to say that I've been testing this for the last month or two. It is absolutely full of all the win ever.

Methinks I made a tiny mistake signing up to work both days this weekend. But then again,

Mealsothinks there has to be some drinking this weekend.

Once again I've neglected you all. Poor show. But some days the empty LJ expanse is pretty daunting. Plus I mostly get to look at you peoples at werk, so there's usually something I should be doing. I think some bullets are in order.

Yeah I've been terrible about keeping up with these. Frankly I'm going to blame twitter for making it harder to save up a reservoir of petulance to post.

This was week two of back to work, and I'm still wandering to work grinning, and leaving with a bit fat grin too. My first week my boss sent someone to the bar to finish the drinking they started during lunch. And then he came over to my desk and flat knocked every thing off it while cackling madly. That probably sounds like a horrible thing to you, but no, trust me, you must have something wrong with your ears.

However there is a slight bittersweet after-taste, as I had applied for unemployment the week before I was employed. Then I was denied the one unemployment check I absolutely needed. So I was flat broke until payday, which was also the same day rent was due, which means I have 35 dollars now until next week. Woo. Hoo. More the case attempting to figure how to balance gas, food, social engagements and boredom for this week with that much money. It suddenly occurs to me that I should attempt to be better with my money, but that's really easy to say when you don't actually have any, and much harder when you're making it hand over fist. 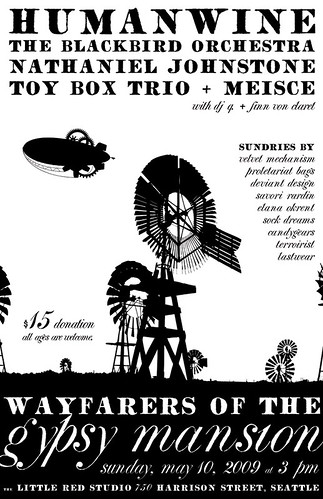 willowbl00 has organized the hell out of this. And HUMANWINE is pretty kickass.